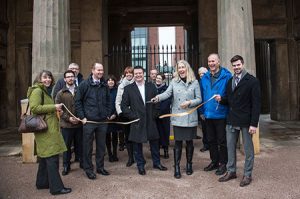 Following the completion of work to refurbish the 200 year old Propylaeum, which provides the entrance to Chester Castle complex; it was officially opened by Councillor Louise Gittins and Peter Barlow from Historic England.

Councillor Louise Gittins, Cabinet member for Communities and wellbeing said: “I would like to thank Historic England and WREN for their grants and the many stakeholders involved that made it possible to restore this magnificent gateway which is considered to be one of the best examples of Greek revival architecture in the country.

“This project has restored the gateway to its former glory and has safeguarded it for future generations to enjoy.”

Peter Barlow, Heritage at Risk architect from Historic England who supported the Council in overseeing the implementation of the Project said: “We are delighted to have supported Cheshire West and Chester in this project which has enabled the Propylaeum to be removed from our register of historic buildings under threat”.

WREN’s grant manager for the FCC Heritage Fund Richard Smith said: “We are delighted to have made a funding contribution to such a worthwhile project. FCC Environment and WREN are dedicated to preserving the past for the benefit of generations to come.”

Vehicle access through the Propylaeum was closed during the much needed refurbishment work. Following the success of the temporary entrance and exit on Castle Street to the court buildings and the University of Chester it has been decided to continue using this on a permanent basis.

The entrance through the propylaeum will be maintained for pedestrians and emergency access which will protect the refurbished structure providing a better opportunity to showcase one of Chester’s most significant Grade 1 listed heritage assets in its own right, rather than return it to its former role as a car park entrance.

Grosvenor Construction Ltd., specialist historic building conservation contractors worked with structural engineers, Chester based Ramboll specialists in the repair of historic structures. The work was overseen by Historic England, to ensure a sympathetic restoration was carried out.

WREN is a not-for-profit business that awards grants for community, biodiversity and heritage projects from funds donated by FCC Environment through the Landfill Communities Fund.