Head out not home in Chester this Summer 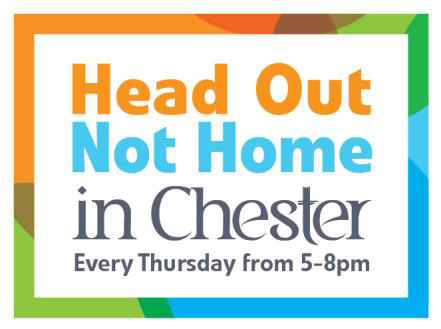 A packed programme of activities to celebrate summer in Chester will see the city’s streets filled with music, movies, outdoor theatre, parades and sporting events, as well as a free dinosaur-inspired family trail and fact-finding mission!

The details have been announced by the city’s Business Improvement District CH1ChesterBID, which has also launched a new ‘Head out not Home’ campaign designed to bring added entertainment to Chester city centre every Thursday between 5pm and 8pm this summer.

More than 40 stores – including Primark, Next, and Debenhams as well as many inside the city’s Grosvenor Shopping Centre – are backing the campaign and will be keeping their doors open late from Thursday 7 July until Thursday 1 September.

“’We’re delighted with the support ‘Head Out, Not Home’ has received from many of our city centre retailers, but the campaign isn’t just about late night shopping”, said Carl Critchlow, CH1ChesterBID Manager. “We’re planning some fantastic evenings of entertainment including live music, comedy, culture, cinema, theatre and sport in the city.

“That’s all in addition to the fantastic events and activities we’ve got planned as part of our Chester Fiesta this summer, so we hope people head out to Chester over the next few weeks and enjoy everything our wonderful city has to offer.”

For more information about the range of events taking place in Chester city centre this summer and to find out how to take advantage of free parking in the city after 3pm, visit www.ExperienceChester.co.uk